This week, we’re introducing an all-new tutorial! 👨‍🏫 Now, new players can learn all of SkyWeaver’s fundamental mechanics within the game. Head over to the Training section and choose 1 of 4 different scenarios including: The Basics, Keywords, Spells, and Enchants! Also there's 200 card changes.

In this patch we shift to the next stage of design: launch preparation. We're shelving the more experimental and complex designs in favor of our greatest hits and a polished curve as we settle into the launch meta. Not all changes included, such as template or name only.

Simplified. I could see adding Study back to the card pool later, for now it's just on Ponderous.

Nerfed. The Discovery winrate has been plenty strong, and Skeeter has found a role in constructed against low-unit decks.

Text: Sunrise: Gets +1 Health. ➞ None

Bumped up the curve. A big part of being launch ready is having a good curve, especially for Discovery. This patch takes extra care to leave each prism with a smooth and diverse curve.

Changed to a different kind of reveal from Bad Dreams.

While most experiments are being toned down in favor of stability, there are still areas we can push on power. Copies are strong in a singleton game, and historically Illusion has shown that to be true. However, I think we've addressed the most exploitable copy targets - such as Avatar of Light, Magnanimous, Zam - so I'm curious if a 3c copy effect is safe.

Buffed with some additional upside to justify the mana condition, and a guard with Shroud is a nice defense niche.

Back to 2c, but with reduced range, which should put more focus on synergy over raw board reset power.

Bumped down the curve. This is a potent effect once it gets going, but I think the speed of SkyWeaver can handle this at 5c.

Small buff. Should be a good source of draw in Strength, as it works well with units that focus on stats over attachments.

Small buff. A few of the Royal Mummy cards are picking up banner with the 2/2 mummies.

Bumped up the curve, Frost Adept can be nasty.

Differentiating stats and role from other Agility units.

Bumped down the curve. Keeping an eye on the healing potential.

Buffed, and moving a mind unit to Agility - they can't all be in Intellect and Wisdom. I want each prism to have access to each element, at least in the 1c-3c range. While each prism will still have its favorite elements, I think it's good for the launch set to support a stable and diverse base to build on.

Text: Gets +1 Power when you play a spell with cost equal to this unit's power or more. ➞ Sunset: Spend two mana to draw.

Absorbed old Plethora to diversify the art and element.

Simplified and focused. Heart is taking some unit buffs this patch, in its "support prism" role.

Seeing if this still has merit in Constructed at 5c, though I imagine it will suffer in Discovery.

Bumped down the curve, which should be potent with this effect, though the spell's reveal is toned down.

Nerf to a powerful and flexible clear.

Swapped spots in the curve with Hurricane.

Bumped down the curve to take Cloud Kid's slot in Agility. Should be a nice buff to this card, and now it can go in the Teleport decks.

Swapped a power for banner, to give the Hoplite more to protect.

Bumped up the curve, and Shroud should make this a more reliable stall.

Reverted to a simpler version, especially in the double Teleport prism.

Haven't seen this in a while, and the mulligan tools have been nerfed some. Reverted to the bigger buff.

This is a bit of a spicy one to have in the card pool, as it's an accessible way to disrupt key 1c units. I could see changing this to conjure if the RNG is too heavy (nooo my Hax!) so we'll see.

Simplified, and should be a stronger clear.

Bumped up the curve to add some inherent value. Copies are strong in singleton, and this makes the copies more immediately accessible, so we can tone down the stats if this version is more inherently potent.

Bumped down the curve and moved to a more aggressive prism.

One final nerf, I think this version is the one. It has been educational to slowly tune this one down piece by piece and watch its winrate data react.

Reduced the stats to add barrier back, and doing the stat swap thing.

Stats nerfed, as the spell got -1c.

Buffed to further justify the drawback.

Small buff, all enemies are SHOOK.

Swapped draw consistency for banner, and toned down the reveal.

Minor change to no longer combo with Lead - now it must dust in order to summon.

Bumped up the curve.

Added the draw back, it was nice with the spell. Changed stats to remove armor.

Small stat buff to really push on this one.

Narrowed the draw and nerfed the stats, to fill a unique tutor role.

Buff to a weirdo.

Bumped down the curve to focus on combo damage.

Buff to combat role, as this very much dies to Zap.

Reworked to fit into Strength, with a steeper condition.

Fixing a mistake, this should just reduce spell cost.

Swapped with the spell Supercharge, with a stat buff.

Reworked with a more reliable and spicier trigger at a higher slot in the curve.

Simplified to one effect.

Text: Dust your top high-cost dead unit to do damage equal to its cost to target unit. ➞ Do damage to target unit equal to the number of units in your grave.

Reworked to a simple removal spell.

Simplified at 1c. This patch features a few cheap burn spells, we'll have to see if the healing can keep up.

Reworked to a simpler filter, with added upside for empty hands.

Simplified, and only on Harpex.

Reworked with a new kind of condition.

Simplified down the curve to fill a unique sturdy combat role.

At long last, the full impact of Ill Will has been reduced, focusing more on big hand punish.

Keyword nerf now that Fate has made the value consistent.

Stats changed so the health doesn't immediately go above curve.

Bumped down the curve, should be spookier here.

Back to a simpler execution, with bonus reveal at 3c. Most of the mass Dazed were removed, there should still be room for some.

Toned down the effect now that the stats have found their role.

Reworked the stats to remove armor, and I like this role in Strength.

Added another layer of disruption. Now in the Castus prism.

Bumped down the curve so that it's not in conflict with Hot Doge. The threat of a turn one Glory activation is spooky. Maybe the fire deckbuilding restriction is enough, and we can balance the 2c Glory effects. Or maybe this kind of effect should still be at 4c to give the enemy an opening to defend. We'll see.

Buffed to protect the spell.

Reworked with a new element, and one of those spooky 2c Glory effects.

Reworked to do damage to nerf vs. armor and Barrier. 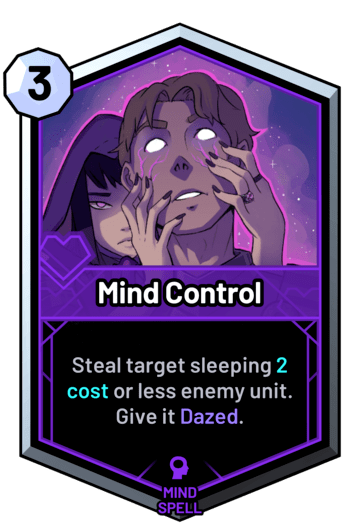 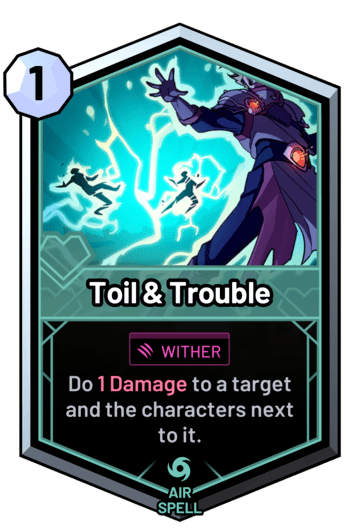 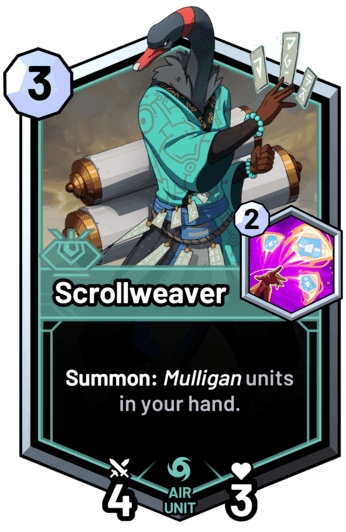 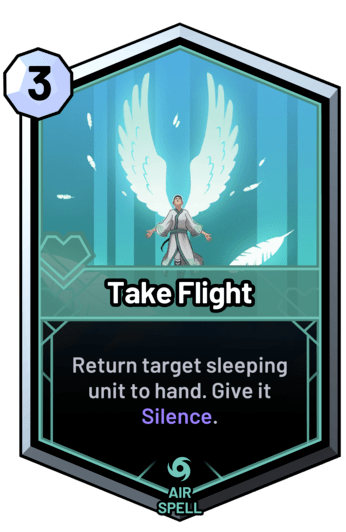 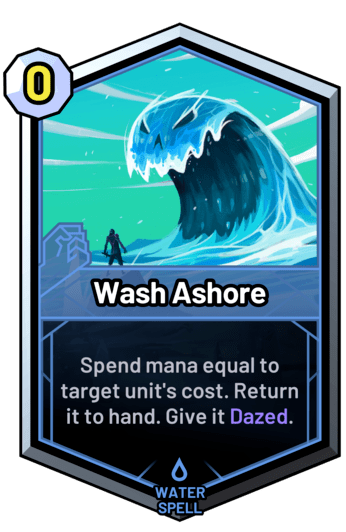 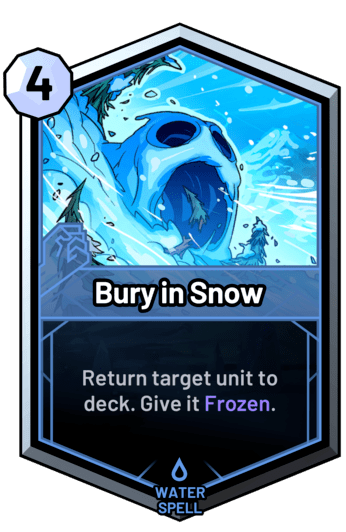 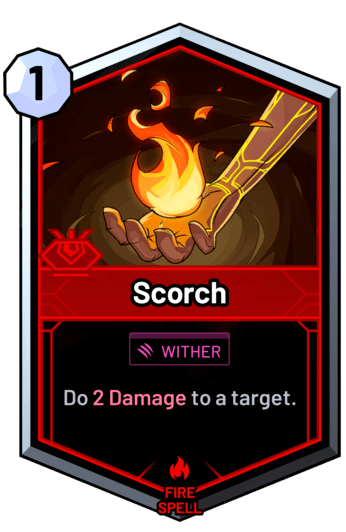 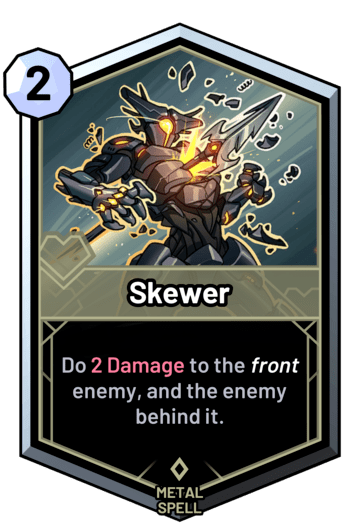 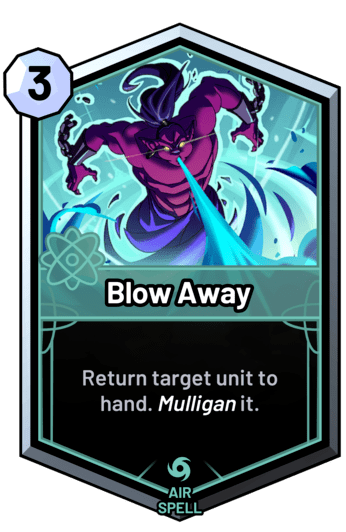 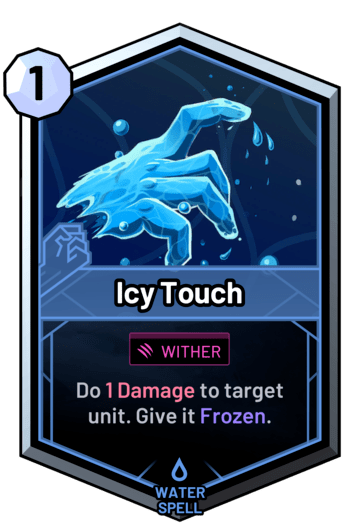 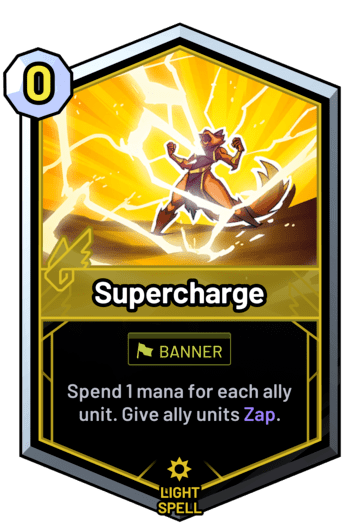 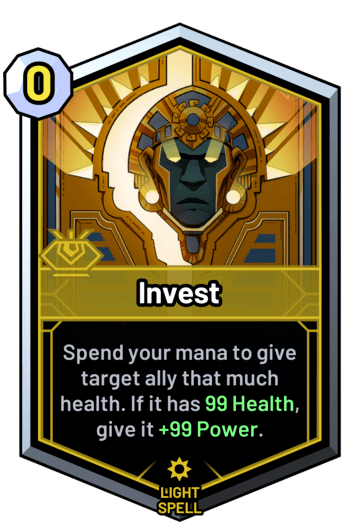 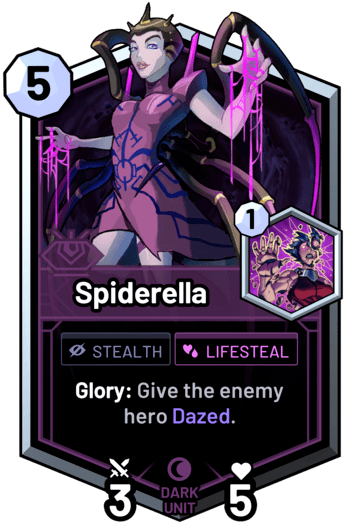 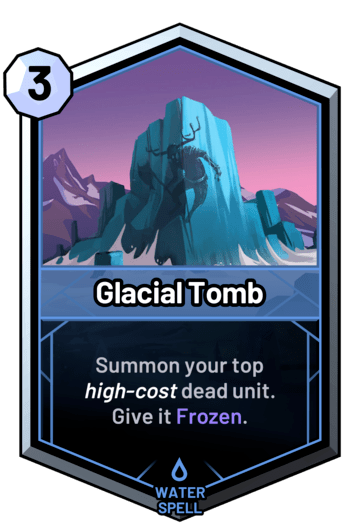